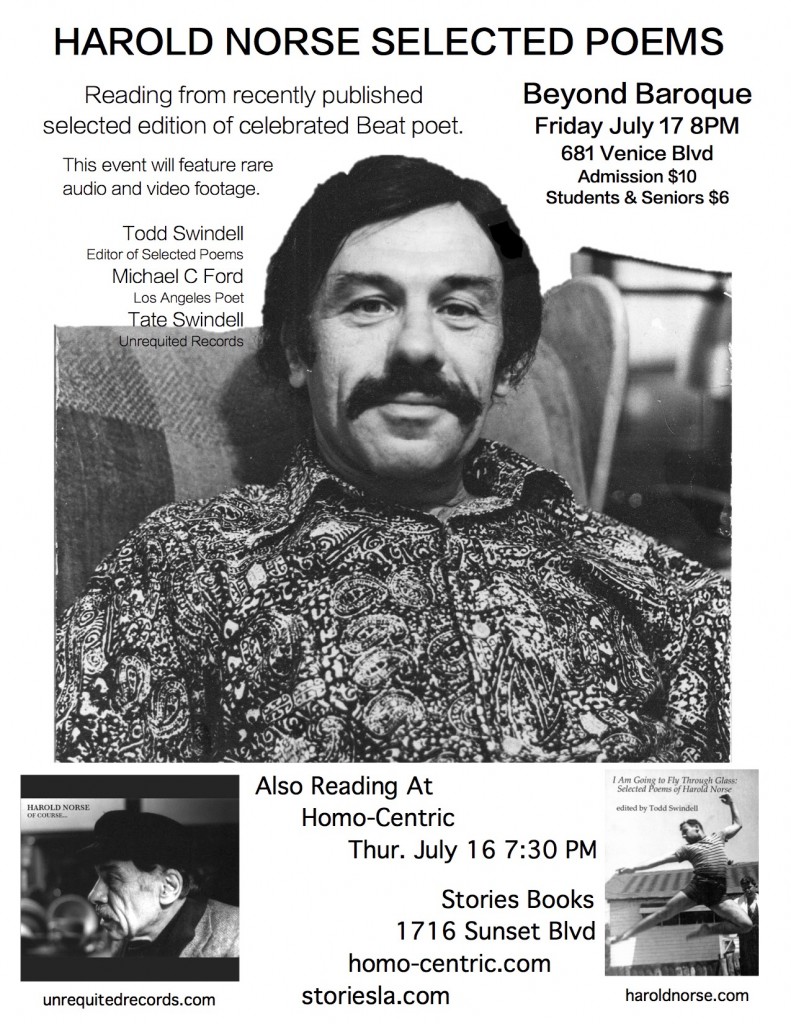 After spending fifteen years living in Europe and North Africa, poet Harold Norse returned to American soil in 1969 settling in Venice Beach. It’s fitting then that the Bastard Angel returns to Southern California for a series of poetry readings heralding the publication of I Am Going to Fly through Glass: The Selected Poems of Harold Norse.

On Friday, July 17 at 8PM, legendary Venice literary arts venue Beyond Baroque will host a very special event that will include not only poetry but exclusive video footage and audio clips. At this reading, I’ll be joined by my brother Tate, of Unrequited Records, and Los Angeles poet Michael C Ford. Please note this is a ticketed event. 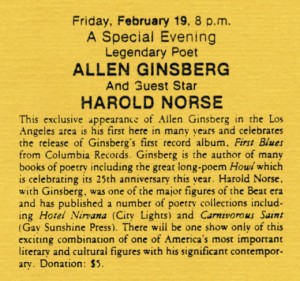 This won’t be Harold’s first time at Beyond Baroque. In 1982 he read with his old friend Allen Ginsberg who was promoting the release of his first record album, First Blues, which featured Bob Dylan, David Amran and Arthur Russell. Allen and Harold first met in 1944 late at night on a deserted subway car. When stopped at a station, Harold heard an inebriated young man across the aisle reciting Rimbaud’s The Drunken Boat in French. “Rimbaud,” he exclaimed to which the 18-year-old Ginsberg replied, “You’re a poet!” This event listing was discovered amongst Harold’s archives which are housed at the Bancroft Library at UC Berkeley.

Publishing steadily, since 1970, Michael C Ford is credited with 28 volumes of print documents and numerous spoken word recordings. He received a Grammy nomination in 1986 and earned a Pulitzer nomination in 1998.

His most recent volumes of work are the pamphlet edition of music related poetry entitled Atonal Riff-Tunes to a Tone-Deaf Borderguard [2012] and a 2013 volume entitled Crosswalk Casserole: both of which are published by Lawn Gnome Books in Phoenix, AZ.

Michael was a student of Kenneth Patchen & Kenneth Rexroth both of whom influenced the San Francisco Poetry Renaissance of the 1950s. He’s also performed with Michael McClure and the surviving members of The Doors including a numerous performances with Ray Manzarek.

Michael Limnios’s website Blues.gr, which contains interviews with many poet friends of Harold’s, includes an excellent exchange with the poet. This interview indicates the distinctive talent in store for July 17th’s reading: 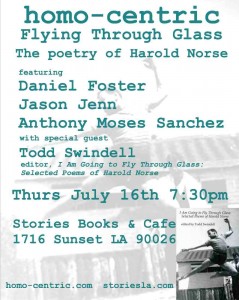 This will be an exciting opportunity for Harold’s poetry to be brought to life by a unique selection of gay male voices. homo-centric will be held on Thursday, July 16th at 7:30 PM. Please come early so you can browse the bookstore or enjoy a beverage at the café.

Next week haroldnorse.com will feature more material on Harold’s time in Venice Beach in the early 1970s which  included his friendships with such diverse writers as Charles Bukowski and Anaïs Nin. Make sure you check back for it!