I wish I could use the language like you. You have all the words and you use them exactly as they should be spent. I don’t have the words. I’m afraid of them. — Charles Bukowski, letter to Harold Norse, July 6, 1966

Lately some long overdue attention is being directed to Harold Norse. A recently published collection on the topic of writing by Charles Bukowski was reviewed earlier this month in the New York Times.

Significantly Bukowski’s correspondence with Harold is quoted in the review’s second paragraph and he is mentioned again later in the piece.

It’s high time people are made aware of the influential role Harold played in the skid-row operatic narrative of the controversial author. Few know that Norse and Bukowski had a correspondence which spanned two-decades, one that began in 1963 when the L.A based Bukowski was still unknown. 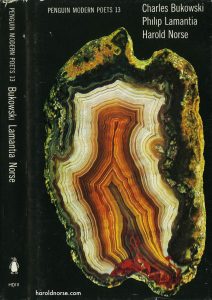 The Bukowski/Norse correspondence was transcribed and edited, with a piercingly perceptive introduction by Harold, and given the striking title Fly Like a Bat Out of Hell. Sadly the book was never released and it know rests, complete and ready to publish, in Norse’s archives at the Bancroft Library.

Many years ago the loathsome San Francisco Weekly published a cover piece on Harold at the time his Collected Poems was published. Though histrionic and loose with facts about the radical AIDS activism of ACT UP San Francisco, the piece brings attention to the, at that time, pending publication of the Bukowski/Norse letters. It’s worth reading (link here), especially for the references to Fly Like a Bat.

This quote by poet Neeli Cherkovski, a close friend to both writers, is especially perceptive:

“Bukowski was very enamored of Harold’s writing early on,” says Neeli Cherkovski. “He loved both the experimental quality of it and the street-level quality of it. Here was a man [Norse] who had reneged on the New York life on the literary starship, being published in all the right magazines. He led this gutsy life in Greece, carving out his own life as a literary renegade. Bukowski was distrustful of the beats, and he admired that.”

Poet Jack Foley is among the most knowledge and aware persons when it comes to poetics. Another close friend of Harold’s, his insight is particularly sensitive to the way Norse’s legacy has remain obscured. For many years Jack has hosted COVER TO COVER, a weekly poetry radio show on KPFA 94.1 FM, Wednesdays, 3-3:30 PM. The Sept. 2nd & 9th shows will feature a tribute to Harold Norse. Here is Jack’s overview of the upcoming program:

“Today’s show is a tribute to the late poet and Gay icon Harold Norse (1916-2009). Talisman Press has recently published a new selected poems by Harold Norse.

Edited by Todd Swindell and with an introduction by Harold’s old friend and cruising buddy, Neeli Cherkovski, it’s an excellent passageway into the work of a man admired by writers as diverse as James Baldwin, William Carlos Williams, W.H. Auden, Allen Ginsberg, and Charles Bukowski. 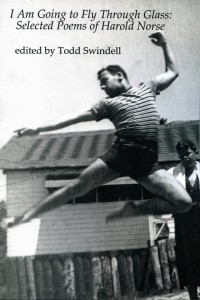 The title of the book is I’m Going to Fly Through Glass, and the cover features a remarkable 1938 photograph of the young poet executing a balletic leap, a tour jeté en l’air. Other photographs are contained in the book as well. Jack opens the show with a piece he published soon after Harold’s death and then plays excerpts from an interview he did with Harold in 1991.

I was asked recently, “Who reads or remembers Harold Norse?” It was a good question, and I would have to admit that the answer is very few people—and, further, that these people are much more likely to be Californians than New Yorkers. Yet everyone who reads Norse remarks that he is a very good poet. Why isn’t he better known? Admired people admired his work. William Carlos Williams, James Baldwin, Allen Ginsberg, William Burroughs, many others—all thought he was a fine writer. Charles Bukowski, who admired very few poets, unstintingly admired Norse.

I think the problem is that Norse’s imagination never moved towards what might be called spectacular or scandalous or attention-grabbing modes. Think of the difference between Norse’s excellent, explicit gay poems and a book like Jean Genet’s Nôtre Dame des Fleurs.

The same tension that played itself out on a stylistic level in Norse’s work—should he write formal verse, should he write something freer?—was also present in his psyche. (Note, incidentally, that the concluding, climactic line of the free verse “I’m Not a Man” is a line of almost exact iambic pentameter.)

For all Norse’s genuine courage, his risks tended to be in areas others had explored before. Beat Hotel is a very fine book, but there is Naked Lunch. Norse has a fine poem about his mad mother in a rest home—but Ginsberg had already written “Kaddish.” There is no Waste Land, no Howl—and certainly no Maximus Poems—in his oeuvre. Yet is this Norse’s problem or our own? We live at a time when it is almost impossible to praise a poet without calling him “great”! Norse was not a “great” poet, but he was a very good one. Williams, Baldwin, Ginsberg, Burroughs, et al could give him praise, but they could not give him their audiences.

Shouldn’t there be a place for a man who, in Auden’s phrase, spent his life in “writing well”? Isn’t it the point of magazines like American Poetry Review (APR) to direct readers towards the little known, the careful, caring writers who kept the flame alive but who never used it to burn anything down?”