“Harold Norse’s poetry was very much expatriate poetry,” Lawrence Ferlinghetti said. “It was the voice of alienation from modern consumer culture.”

As this week marks the seventh anniversary (June 8, 2009) of the death of Harold Norse–visionary Beat poet, progenitor of gay liberation and oracle of the American Idiom–it’s a fitting time to look back at some of the obituaries published in the weeks after he spoke his last words on this mortal coil, “The end is the beginning.”

The New York Times obituary described him as a poet who “broke new ground beginning in the 1950s by exploring gay identity and sexuality in a distinctly American idiom relying on plain language and direct imagery.” Featuring a great photo Harold taken in 1973 by Neil Hollier, the obit included this quote from Harold’s good friend Neeli Cherkovski:

“Harold was one of the pre-eminent rebel poets of our time,” the San Francisco poet Neeli Cherkovski said. “He was someone who smashed conventions, like Ginsberg, and broke through to what he called a new rhythm, writing the way he talked, using the voices of the street. He also gave voice to homosexuality early on.”

The Los Angeles Times obituary described Norse as a “mentor or peer  to many of the greatest talents in 20th century American literature, including Tennessee Williams, James Baldwin, Allen Ginsberg and Charles Bukowski” who “was unabashed about being homosexual and poured his experiences into poems that reflected anger, sadness and pride.”

The accompanying  photograph of Harold was taken in the kitchen of his apartment at 157 Albion Street in San Francisco’s Mission District by Norse’s old friend Ginsberg. This time the quote came from Lawrence Ferlinghetti who published Harold’s book Hotel Nirvana in 1974 as part of City Lights Books prestigious Pocket Poets Series.

“He was essentially an expatriate voice in American poetry,” said Lawrence Ferlinghetti, the poet and bookseller who published a volume of Norse’s poems in the mid-1970s. “He had an original voice because he ventriloquized what a lot of other poets were saying. . . . He could sound in one poem like T.S. Eliot . . . or in another poem like William Burroughs.” 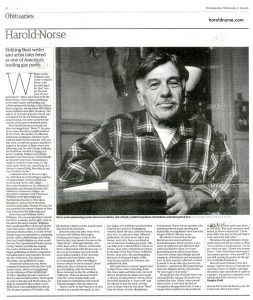 Under the headline “Striking Beat writer and artist later feted as one of America’s leading gay poets“, the UK Guardian newspaper published an appreciation by Douglas Field, renowned James Baldwin scholar and a friend of Norse.

Along with William Burroughs scholar Oliver Harris, Douglas is co-chairing next month’s European Beat Studies Network conference in Manchester, where I will be presenting a talk about Harold’s participation in the development of Cut Ups at the Beat Hotel where he lived in the early 1960s.

The San Francisco Chronicle also ran an obituary with the following quote:

“I consider him one of the best poets there was,” said A.D. Winans, a poet and friend. “He was very congenial, very educated. He was also funny. He could hypnotize you with all these stories about the great writers he knew.” 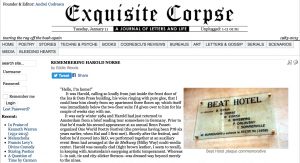 Another of Harold’s poet friends was Andrei Codrescu whose Exquisite Corpse featured two tributes from poet and publisher Eddie Woods.

First up was “Harold Norse Is Dead! Long Live the Carnivorous Saint!“, culled from emails about his death from myself and San Francisco poet Jim Nawrocki among others. The second,”Remembering Harold Norse“, is a lengthy piece by Eddie of his many adventures with Harold that is well worth reading.

Closing out this post is an obituary written by myself and Jim Nawrocki who will be part of the Beat Museum event on July 9.

Harold Norse, whose poetry earned both wide critical acclaim and a large, enduring popular following, died on Monday, June 8, 2009, in San Francisco, just one month before his 93rd birthday. Norse, who lived in San Francisco for the last thirty five years, had a prolific, international literary career that spanned 70 years. His collected poems were published in 2003 under the title In the Hub of the Fiery Force, and he continued to read publicly into his 90s, bringing his work to new generations.

Born in 1916 to an illiterate, unwed mother, Harold Norse’s natural gift for language, influenced from the varied dialects of his surroundings, led to a boyhood interest in writing that blossomed into a rich, peripatetic life that he documented in an innately American poetic idiom.

Like Walt Whitman, Norse was a Brooklyn native. He came of age during the Depression, an experience that significantly shaped his voice and endeared him to a varied audience of underdogs and the persecuted. Beginning in 1934, he attended Brooklyn College, where he met and became the lover of Chester Kallman. In 1939, when W.H. Auden and Christopher Isherwood gave their first reading in America, Norse and Kallman were in the front row winking flirtatiously at the famous writers. Harold soon became Auden’s personal secretary, a role he filled until Kallman and Auden became lovers.

During the 1940s, Norse lived in Greenwich Village and was an active participant in both the gay and literary undergrounds. His close friends at the time included James Baldwin, who was a teenager when he met Norse in 1942. A close friend of Julian Beck and Judith Malina, he was integral in the early foundation of The Living Theater. In the summer of 1944 Norse was introduced to Tennessee Williams in Provincetown, Massachusetts, where the two shared a summer cabin while Williams completed the manuscript for The Glass Menagerie.

Abandoning his doctoral work in English in 1953, Norse sailed to Italy, spending the next fifteen years traveling across Europe and North Africa. Living in Rome, Naples, and Florence, Norse immersed himself in the classical culture that had survived the two World Wars. He found a mentor and friend in William Carlos Williams, who encouraged the younger poet to move away from the classical poetics of academia and explore the poetic possibilities of the spoken word of the American streets. The complete correspondence of Norse and Williams, titled The American Idiom, was published in 1990.

Harold’s travels continued in the 1960s, bringing him to Tangier, where he consorted with Paul and Jane Bowles, Ira Cohen, and Mel Clay. In 1959 he traveled to Paris, settling into the infamous Beat Hotel. Through friend and fellow Beat Hotel resident Gregory Corso, Harold met William S. Burroughs then Brion Gysin. It was Norse who introduced Ian Sommerville to Burroughs as the group experimented with the cut-up method of writing. His collection of writing from that period was published in English as a cut-up novella, The Beat Hotel, in 1983.

From Paris Norse moved onward to Greece and Hydra, where he reconnected with the poet Charles Henri Ford, a friend from Greenwich Village days, and smoked pot with the then unknown poet Leonard Cohen. Harold also spent time in Switzerland, Germany, and England. During this time he maintained a close correspondence with Charles Bukowski, who affectionately referred to Norse as “Prince Hal, Prince of Poets.” In 1969 he edited Penguin Modern Poets 13 featuring Norse, Philip Lamantia and, in his first major international exposure, Bukowski.

In 1969, gravely ill from hepatitis, Norse repatriated to Venice, California where he was met by Bukowski and the young poet Neeli Cherkovski. He enjoyed the social freedom and political activism of the hippy era, so presciently voiced in his writing, which breathed new life into his body and work. Harold also reconnected with Jack Hirschman (the two had spent time together in Greece during Norse’s expatriate years) as well as Anais Nin who first mentored the Brooklyn born poet in the early 1950s when Norse’s first book was published. Recovering his health, Harold became a vegetarian and a body builder at Gold’s Gym along with a young Arnold Schwarzenegger.

In 1972 Norse moved to San Francisco, ultimately settling in the Albion Street cottage he would occupy for the next thirty years. The 1970s were a productive and fulfilling time for Harold as the personal and sexual liberty he had lived clandestinely now became the cultural norm. City Lights Books published a collection of poems tilted Hotel Nirvana in 1974. It was nominated for a National Book Award. Carnivorous Saint, published in 1977, was an historic collection of poetry that covered Norse’s gay erotic experience from World War II through the Gay Liberation. During this period Harold was a habitué of North Beach coffee houses where he often connected with fellow poet Bob Kaufman.

Norse’s autobiography, Memoirs of a Bastard Angel, was published in 1989 to international acclaim. Chronicling his rich life at the cutting edge of twentieth-century literary arts, Norse’s memoirs were republished in 2002. A National Poetry Association Award was bestowed upon him in 1991. At over 600 pages, his collected poems–In the Hub of the Fiery Force–was published in 2003 During his final years, Norse continued to live in his cottage in San Francisco’s gritty Mission District, continually reworking his poems, giving readings, and corresponding with admirers from around the world.