One of the highlights from the first release event for I Am Going to Fly Through Glass was the opportunity to listen to Neeli Cherkovski share stories from his forty year friendship with fellow poet Harold Norse. From their start of their friendship, palling around with Bukowski in Los Angeles in the late 1960s to Harold helping Neeli come out as a gay man in mid–1970s San Francisco, their relationship as friends and fellow poets continued to blossom through their grey years. Here’s a clip of Neeli talking about those times.

In 1968 Harold returned from fifteen years in Europe to Venice, CA where he was met by a young Neeli and his friend Charles Bukowski. Neeli shared a great story of the three of them out to dinner one night.  Carnivores Neeli and Bukowski were chowing down on t-bone steaks while Harold noshed on a salad. Bukowski’s competitive nature edged him to growl at Harold, “What’s wrong with you? Why don’t you eat like a man?” Harold. still chewing his salad, replied in his Brooklyn accent, “Let’s see who lives longer.” Neeli’s summation–– “Needless to say it was my dear friend.” Neeli wrote a poem about Harold’s survival as an elder poet titled “Slicing Avocados” where Harold advises “you have to eat like a rabbit/in order to survive.” More of these wonderful anecdotes are included in Neeli’s brilliant introduction to the new collection of Harold’s poetry. 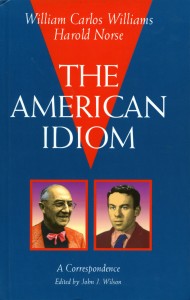 After Walt Whitman, one of the greatest influences on both Neeli and Harold was William Carlos Williams whose poetry broke from academic convention to celebrate common American speech. In the early 1950s, Williams singled out Harold amongst the upcoming Beat poets and acted as a mentor, encouraging him to write in the American idiom. Their correspondence was collected and later published under that title. It remains an insightful document worth searching out. In this last clip Neeli reads, from the selected edition, Harold’s poem “William Carlos Williams” which he characterizes as “one of the greatest tributes from one poet to another.”