“I think in the 1960s, by the 1960s, most people thought by now in the 2010s we would have abolished prisons, abolished wars, abolished police, abolished national boundaries. We didn’t abolish any of that. It’s still around and the work remains to be done.”

Though she was quite old and in very poor health, word of Judith Malina’s death seems implausible. Surely someone so filled with the fire of liberation could transcend even death, yet none of us escape that final curtain. Harold Norse’s history was intimately entwined with Judith and her partner Julian Beck. He was integral in the creation of the Living Theater and befriended many in their circle like Paul Goodman, Ira Cohen, Hanon Reznikov and Mel Clay.

I had the opportunity to meet Judith two years ago for a film project about Harold which my brother Tate and I have been working one for some years. It was the afternoon of a partial solar eclipse and the astral energy was strong. I recall a nervousness, thrilled to meet one of my inspirations, absurdly hoping to capture everything about her and Harold’s relationship within the few dozen minutes we spent on camera.

Though frail and bent, her presence remained luminescent. Dressed in black, her lips painted bright red and a colorful shawl draped across her shoulders, Judith wasn’t much interested in recalling the past. It was the present, the next play that intensified the light in her eyes. She was immensely patient with my list of names and dates. It wasn’t until Tate suggested i jettison my printed notes that the exchange began to swing.

Judith was a performer, an artist. Born in Germany, her family immigrated to the United States in 1929.  With a mother who was an actress and a father who was a rabbi, there was no separation for Judith between the artistic and the spiritual. For her, everything was political. This was the young girl who, during the second World War, beseeched her parents that we must show the Nazis we love them. No enemies, no fear.

Judith Malina was a new Yorker to the bone. As a student of The New School, she had the chance to study with many of the artist refugees fleeing Europe. An early mentor was the dramatist Erwin Piscator who, along with Bertolt Brecht, was the foremost proponent of “epic theater” which espoused that theater should be a force for social change.

“Harold introduced Michael Fraenkal who brought a word into my life that’s really been central. Michael Fraenkal said the problem is the system. We began to analyze what is the system? It sounds like some kind of abstraction you know? The System. Well the system is the money and the form of give and take we practice with each other, the form of how to make a living in the world, how to live in the world. It’s all part of the system. We can’t entirely get out of it.”

It was Judith’s friendship, love affair and collaboration with Julian Beck that ignited the spark of theatrical revolution. Julian and Harold had become friends during the summer of  1944 in Provincetown. Beck at that time was a painter. Harold lived in a cottage with Tennessee Williams who was finishing his “pot boiler” The Glass Menagerie. 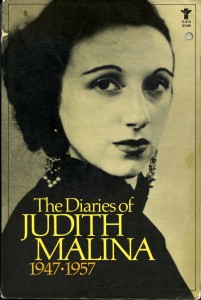 Readers are encouraged to seek out Judith Malina’s diaries which tell many tales of the Living Theater’s early days. Harold’s input was integral as it was his reading of an essay by W.B. Yeats essay on The Theater, which suggested that a stage wasn’t required in order to perform, a stage could be anywhere, that lead to the first Living Theater performance in the Beck’s apartment on West End Avenue.
Harold’s then lover was the composer Dick Stryker, whose music accompanied a number of early Living Theater performances. They also shared a mutual friend in the poet William Carlos Williams whose play Many Loves was the Living Theater’s first production. It should be noted that Judith and Julian were instrumental in promoting the dramatic works of Gertrude Stein.

“[William Carlos] Williams liked my English. Wrote me a letter in fact saying…how impressed he was to hear an American voice. Now I never thought of myself that way but Dr. Williams flattered me with that appellation. I like to have an International accent. I don’t want to be American. I want to be planetary, cosmic maybe even, post-planetary.”

Her diaries also record her and Julian’s resistance to Cold War paranoia and their radical opposition to nuclear weapons. During the 1950s it was common to hear air raid sirens blasting in lower Manhattan, so called civil defense alarms. At these times, you were required by law to take shelter indoors. Peace activists saw this ruse for what it was- the government’s desire to normalize Armageddon. Joining such illustrious company as gay civil rights organizer Bayard Rustin and radical Catholic worker Dorothy Day, the Beck’s refused to go inside during a mid-day air raid drill and were arrested. Judith’s diaries continue the story with her incarceration at the infamous Women’s House of Detention on Greenwich Avenue. 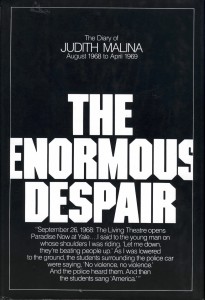 A second volume of the diaries covering the years 1968-69 when the Living Theater returned from several years in Europe to which they’d fled following persecution by the IRS that had closed their theater location. They toured college campuses filled with radical students performing such pieces as Paradise Now and The Mysteries. Featuring an all black cover, the second volume of diaries was appropriately titled The Enormous Despair.

When I visited her in 2013, Judith mentioned that she was working on another volume of her diaries. She continued to keep her daily journal in addition to working on two new plays, one of which was to performed with the fellow residents at the Lillian Booth Actors Home just across the Hudson River in New Jersey.
Judith’s energy expanded as she related how much she had grown in the last twenty years of her life, how much she learned in her 80s compared to her 70s and how different that was from her 60s. She was still discovering, still at work, working for the beautiful non-violent anarchist revolution. That task is still ours to continue but with her reminder that the work should be playful, thoughtful and most of all loving.

One Reply to “We Salute Judith Malina- Actress, Playwright and Revolutionary”