“What the evolution of these poems speak to me is of Harold Norse becoming even more vociferous in detailing the life of a gay man in his times.” 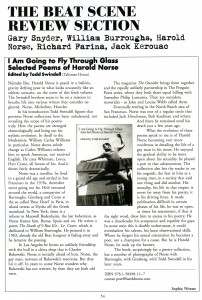 For the last twenty-five years, UK based Beat Scene magazine has covered the legacies and influences of Beat associated writers and artists. The Winter 2015 issue features an excellent review by Sophia Nitrate of I Am Going to Fly Through Glass which she describes as a “fresh volume” whose arrangement of poems “bring out his stylistic evolution.”

“He was a cheerleader for acceptance and equality for gays. In some ways this is doubly unfortunate, it could overshadow his talents, his keen observational skills. Where he forgets his sexual orientation he becomes a poet, not a champion for a cause. But he is Harold Norse, he took up the banner.”

Thanks to Kevin Ring at Beat Scene for helping UK readers of Beat literature know more about the life and poetry of Harold Norse. Make sure you don’t miss Kurt Hemmer’s interview with Herbert Huncke. 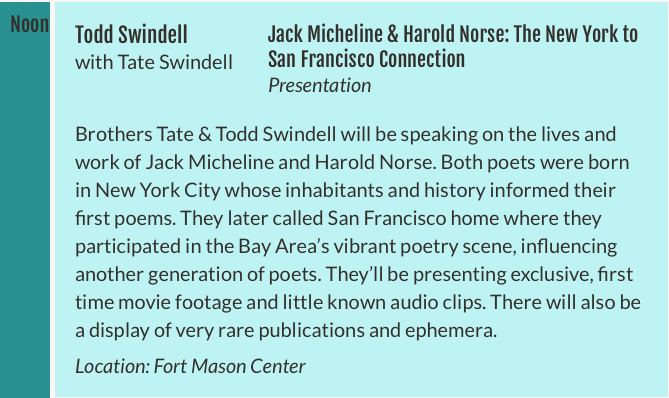 The folks at North Beach’s Beat Museum have organized their first Beat Conference that will be held at Fort Mason during the last weekend of June. I’m excited to announce that there will be a panel featuring Harold and Jack Micheline. Both began writing poetry in their native New York City and both ended their years in San Francisco. 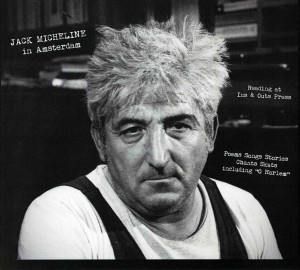 Micheline, who was more a poet of the streets than Harold, was known for his dynamic poetry readings- performances really. Joining me will be my brother Tate who, through his Unrequited Records, had released two recordings by Jack Micheline. The presentation will feature an exclusive screening of Harold Norse video footage from our forthcoming film project as well as rare recordings and books. 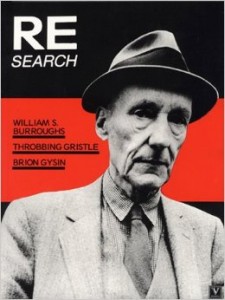 The rest of the schedule includes some very interesting presentations. San Francisco publishing luminary V. Vale will be speaking about William Burroughs. Vale’s influential RE/SEARCH publication featured the cut up works of Burroughs and his connection to the British music and art collective Throbbing Gristle in their 1982 issue.

Also there will be a session with Dr. Phillip Hicks who was Allen Ginsberg’s psychiatrist in 1955 when the young poet was at work on Howl. Those familiar with Ginsberg’s story will recall those sessions were instrumental in Ginsberg’s decision to unburden the gay voice within his poetry and establish his relationship with Peter Orlovsky. Plus Herbert Huncke biographer Hilary Holladay will be returning to San Francisco to share more about this under appreciated Beat storyteller. View the full schedule here.

If you’re near Sonoma County, you won’t have to wait until June to hear more Harold Norse poetry. Hot on the heels of the recent knock out San Francisco event, Petaluma’s Copperfield’s Books will host the next Norse selected poems reading on Saturday, May 9th at 1:30PM. 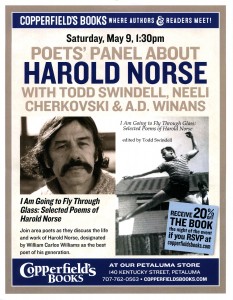 Along with Neeli Cherkovski, this event will feature San Francisco born poet A.D. Winans has been in the publishing industry for over five decades. As the founder of Second Coming Press, he published a 1973 special issue on Charles Bukowski that included Norse’s poem “The Worst Thing You Can Say to Him is I Love You.” His latest book, Dead Lions, was published last year by Punk Hostage Press.