Copperfield’s Books in Petaluma hosted the latest reading for the selected poems of Harold Norse for an attentive of 30 people featuring readings and remembrances by the book’s editor Todd Swindell and San Francisco poets A.D. Winans and Neeli Cherkovski.

A.D. Winans brought along copies of his book This Land Is Not My Land for which Harold had written the introduction. He has published over 50 books in addition to two decades of running the small press publisher Second Coming. His latest book, Dead Lions, features essays on many of the writers he’s known including poets Jack Micheline and Charles Bukowski.

A.D.’s selection of poems included some of Norse’s lesser read works such as “The Ex-Nun and the Gay Poet” and “For All These You”. “North Beach” featured recollections of North Beach fixtures Bob and Eileen Kaufman both of whom Winans had known. A.D.’s reading on Harold’s classic poem “I Am Not A Man” was especially moving.

Neeli Cherkovski read his poem “Hydra” which is a moving tribute to Harold and the experiences both poets had on that magical land amongst the Saronic Islands of Greece. The poem is included in Neeli’s latest book The Crow and I which among his best work.

Many of the warm anecdotes from their over four decades of friendship are included in Neeli’s brilliant introduction to the selected poems. At the reading he read some brief passages from it including this one:

“Harold and I cruised the gay bars. One night he turned to me as we were sitting in a bar on San Francisco’s Folsom Street, center of the leather scene and he said, ‘Could you imagine Walt Whitman at our side? We’re trying to be the cool, observant types, and he would be spouting poetry.'”

A wonderful surprise was to find amongst the audience a woman who had met Harold over fifty years ago. Monique Laurin had known Harold in Naples and Paris as her mother Julia was a confidant and benefactor to the expatriate poet. The family is featured in Harold’s Memoirs of a Bastard Angel.

In fact Julia Laurin was responsible for Harold’s first visit to Paris after the two initially met in Naples. Mme. Laurin offered Harold the use of the family’s apartment on the Ile St. Louis, one of two tiny islands located in the heart of Paris on the Seine River. It was on the train to Paris that Harold shared a compartment with a young Roman Polanski who was on his way to Paris having had no success as a film director in Rome.

While staying in the small but cozy apartment filled with Oriental objects in a gray stone house some five hundred years old, Harold had a torrid affair with a closeted male writer who introduced him to famed author James Jones, who lived nearby on the Ile de la Cité. The two became good friends during that time and Jones had no qualms admitting to his same-sex exploration.

One afternoon the two writers were having drinks at Les Nuages in St. Germain along with Beat poet Gregory Corso. At one point, Jones asked Harold whether he preferred boys or girls. Harold replied he preferred boys. When Corso asked Jones, “Have you had any queer experiences,” the celebrated novelist replied in his gruff voice, “Sure, many times.”

The impish Corso pressed on, “Did you like it?” “Yeah, very much,” growled Jones. “The only thing I didn’t like was, when you kiss, the other guy’s beard scratches. But after a few experiences I kind of lost interest. I just happened to like women more.” Harold admired Jones for his fearless honesty. The only straight man he new who didn’t cover up or misunderstand. “Jones was unafraid of the truth. Unlike most writers, he wasn’t a liar.”

Thanks to Ray Lawrason and the staff at Copperfield’s Books in Petaluma for providing a space to share Harold’s poems and connect with those who knew and loved him. The store now stocks the selected poems, so make sure you stop by and purchase a copy. 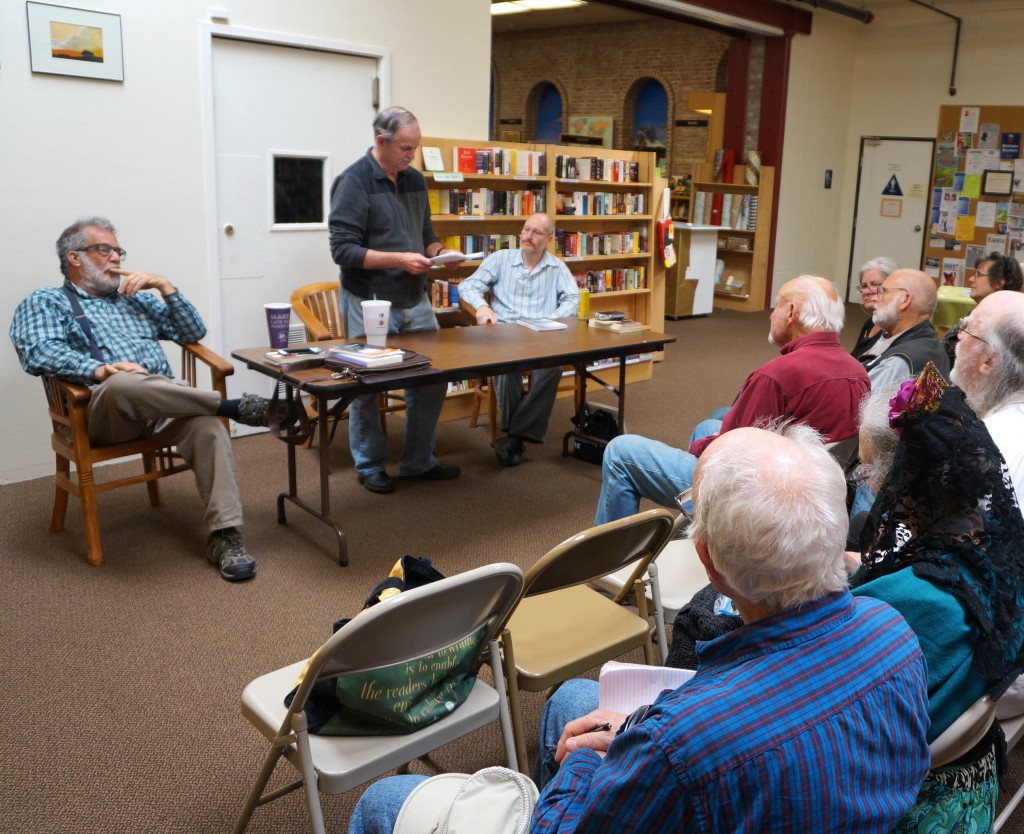