July 6, 2016 will mark the hundredth anniversary of the birth of master American poet Harold Norse. Known for his association with Beat literature and gay liberation, Norse’s work retains its pertinence in today’s fractured world of politics and despair. This has been reflected by increased attention to Norse’s legacy from The New York Times to the International Times.

Since April is National Poetry Month there will be further posts this month to kick off the Harold Norse Centennial. In the meantime, here is information about upcoming events so you can make sure to mark your calendars. 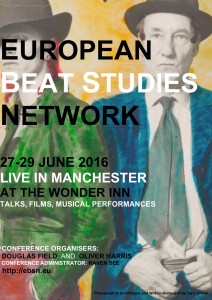 The European Beat Studies Network is hosting its annual conference in Manchester, England June 27 to 29. Co-chaired by renowned Burroughs scholar Oliver Harris and Manchester University professor Douglas Field, whose All Those Strangers: The Art and Lives of James Baldwin will be published this summer by Oxford University Press.

The conference program is packed with presentations on all aspects of Beat writers and artists. It’s inspiring to see a number of presentations about Beat poet ruth weiss, who at age 87 continues to perform her poetry in San Francisco.

As part of Session 13 on the second day of the conference, I will be presenting a talk titled “Cut Out of the Cut Ups: Harold Norse at the Beat Hotel.”

The EBSN Manchester conference is merely the kick off for the Harold Norse Centennial. Beginning on Harold’s actual 100th birthday, July 6, there will be two separate dates of discussion panels in San Francisco co-sponsored by The Mechanics’ Institute and The Beat Museum.

These will be followed by a return to Harold’s old stomping grounds of Venice Beach at Beyond Baroque. Each of these events will feature a short performance of Harold’s poetry by Los Angeles based multi-talented artist Jason Jenn who has previously performed works about gay poets James Broughton and C.P. Cavafy.

Wednesday, July 6 from 7-9 PM at the Mechanics’ Institute, SF

Check back in the coming weeks for detailed information about the events and the authors who will be participating. Also keep on the lookout for a Centennial fundraiser featuring bundles of rare Harold Norse books for sale.