As the Harold Norse Centennial approaches, there will be posts spotlighting the participants in upcoming events, presented by The Beat Museum, to celebrate this historic milestone. On Wednesday, July 6 (Harold’s actual 100th birthday) the Mechanics’ Institute will host a panel featuring San Francisco writers Kevin Killian, Regina Marler and myself, Todd Swindell.

In 2013, the Mechanics’ Institute was part of the Allen Ginsberg Festival that coincided with an exhibition of the Beat poet’s photography at the Contemporary Jewish Museum. The one-of-a-kind event featured everything from Beat poet ruth weiss performing in the Institute’s café space to a panel discussion featuring a whose-who of Bay Area authors that have written about the Beats.

Poet, playwright, and queer bon vivant Kevin Killian was a participant in last year’s reading at Alley Cat Books to promote the release of I Am Going to Fly Through Glass: Selected Poems of Harold Norse which I edited. This accompanying fantastic photograph of Kevin with Harold and poet and filmmaker James Broughton in San Francisco, 1987 is courtesy of Alex Gildzen’s blog Arroyo Chamisma.

For many years Kevin has helped preserve the work and legacy of poet Jack Spicer–a key participant in the 1950s San Francisco poetry renaissance that included John Wieners and Robert Duncan and influenced many Beat writers. His acclaimed biography of Spicer, Poet Be Like God, co-written with Lew Ellingham, was published in 1998. Killian also edited, with Peter Gizzi, the collection My Vocabulary Did This to Me-Collected Poetry of Jack Spicer. The title comes from Spicer’s last recorded words; Harold’s were “the end is the beginning.”

Regina Marler is the editor of the anthology Queer Beats, How the Beats Turned America on to Sex (Cleis Press, 2004) which features two poems by Harold Norse as well as an excerpt from his memoirs. Even though I’ve read a good amount of Beat literature, I found her inclusion of excerpts from lesser known works by Beat-associated authors like the Paul Bowles and poet Alan Ansen to be enlightening. Additionally there are contributions from female writers like Jane Bowles, Elise Cowen and Diane di Prima.

But it’s not only her sharp selection of writers that elevates Queer Beats head and shoulders above other Beat anthologies. Each of the book’s three sections feature an incisive introduction by Regina. Speaking about the homocentric content of Burroughs and Ginsberg, she writes about their

candid attitude towards sex and the body–towards pleasure. This open confession of their feelings is one of the pivots of the movement, and no less vital to their influence on the rising counter-culture than marijuana reveries and restless literary experimentation. 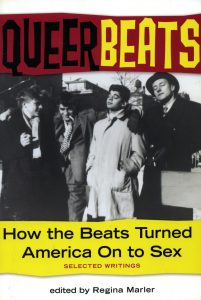 Among the selections I found most illuminating was an excerpt from a letter by Jack Kerouac whom Marler describes as a “sensitive, gentle mama’s boy who goaded himself into macho displays…[whose] queer sensibility was most disguised, folded into the hero worship” of Neal Cassady.

Written on October 3, 1948 to Cassady, Kerouac states “Posterity will laugh at me if it thinks I was queer…little students will be disillusioned.” It’s a telling admission that Kerouac couches the censorship of his same-sex desires as protection for future generations. As Marler succinctly puts it, “He wanted the behavior, clearly, but not the identity.”

Of course this is exactly the kind of ignorant, oppressive attitude that Harold Norse sought to make extinct through his lifetime of confessional, open hearted gay poetry that follows the proud lineage of his Brooklyn forbearer Walt Whitman. Thanks to Queer Beats we can see how authors like Norse, Burroughs, Ginsberg and Gore Vidal were gay visionaries who, Marler claims, “stand outside the normalization of gay sex and identity.”

“They were not assimilationist. If the culture could not accept them, the fault lay in the culture.”

This is set to be a perfect evening to celebrate the 100th birthday of Beat poet Harold Norse, the Bastard Angel from Brooklyn. Please note there is a $15 charge for the public but haroldnorse.com readers can wave the fee by stating they are a “Beat Museum Member” either at the online registration or that evening at the event which is from 7-9PM. As the event will be held in the Mechanic’s Institute’s café space, make sure you arrive early to enjoy a drink at the bar.