Author and Beat biographer Hilary Holladay has been doing her part to bring more attention to the poetry of Harold Norse. As mentioned earlier this year, Hilary’s interview with writer and publisher Jan Herman highlighted his friendship with Harold. Hilary recently interviewed me about Harold Norse, his relationship with Allen Ginsberg, Bastard Angel magazine and my editing of the selected edition of Harold’s poems. You can read the complete interview at hilaryholladay.com.

“Without Harold, the Beats would not have such a rich international dimension. He lived in Paris in the late 1950s and traveled widely. We read often of New York City and San Francisco, but a great deal of the Beats’ influence came out of what happened in Paris, Tangier, and the Greek Islands, and Harold was part of that scene.”

“Harold embraced his Jewish heritage when the Nazis rose to power. Also, he saw how prejudice arose from baseless stereotypes whether it was blacks, queers, or Jews. For instance, Harold—muscular, hairy, butch—was never suspected of being queer. His swarthy complexion and upturned nose could have him pegged as anything from Italian to English to German.” 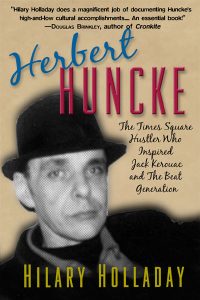 I highly recommend Hilary’s biography Herbert Huncke: The Times Square Hustler Who Inspired Jack Kerouac and the Beat Generation. Huncke’s pivotal role in connecting Beat writers with narcotics and criminality has sadly overshadowed the magnificence of his writings. Though he never published as much as his friends Kerouac, Ginsberg and Burroughs, Herbert was able to convey the sordid tales of those he knew with a rare empathy, which is the essence of Beat literature.

Leslie Winer has been contributing her passion and creativity to Huncke’s estate with the elegant website Huncke Tea Company. I highly recommend perusing their SoundCloud page where you can listen to recordings of Huncke reading along with Leslie’s contemporary interpretations of Herbert’s writings spoken in her dry yet winsome voice. She is currently recording a series of Huncke stories, notebook entries & letters put to some new music co-written with & produced by Christophe Van Huffel which will soon be released on vinyl. 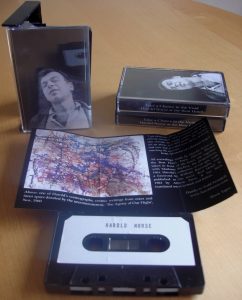 For over a decade, Bart de Paepe’s Sloow Tapes in Belgium has been releasing cassettes recordings from numerous artists who were connected with Harold including Judith Malina, Ira Cohen, Brion Gysin and Sinclair Beiles. Three years ago Sloow Tapes released Harold Norse Take a Chance In The Void: Harold Norse at the Beat Hotel, another cassette-only release from Cut Up recordings made by Harold when he lived in Paris at the Beat Hotel in the early 1960s. I’m pleased to note that the edition of 100 copies has completely sold out.

Last year Sloow Tapes began publishing broadsides with eye catching graphics on the front and poetry on the back of A5 size paper. Sloow Tapes Broadside #11 was released last month featuring Harold’s poem “Wise to its Poisoned Condition.” Here’s what Bart had to say about the broadside,

“Between 1960 and 1963 Norse lived in Paris with William Burroughs and Gregory Corso in the hotel in the Latin Quarter known as the “Beat Hotel”. Although initially wary of the Beat writers’ literary credentials, Norse collaborated with Brion Gysin on the cut-up technique and was briefly an acclaimed painter of ink drawings soaked in the hotel bidet, known as Cosmographs. Norse described himself as a “lone-wolf” and he refused to join the pack, at some cost. In many ways he was more “Beat” than the Beats: Jewish, illegitimate, homosexual.

Norse was an outsider who quietly produced some startling and technically accomplished verse from the fringes of the US literary scene. ‘Wise to Its Poisoned Condition’ is an unpublished poem written at the time he lived at the Beat Hotel and illustrated with a mylar portrait by Ira Cohen.” 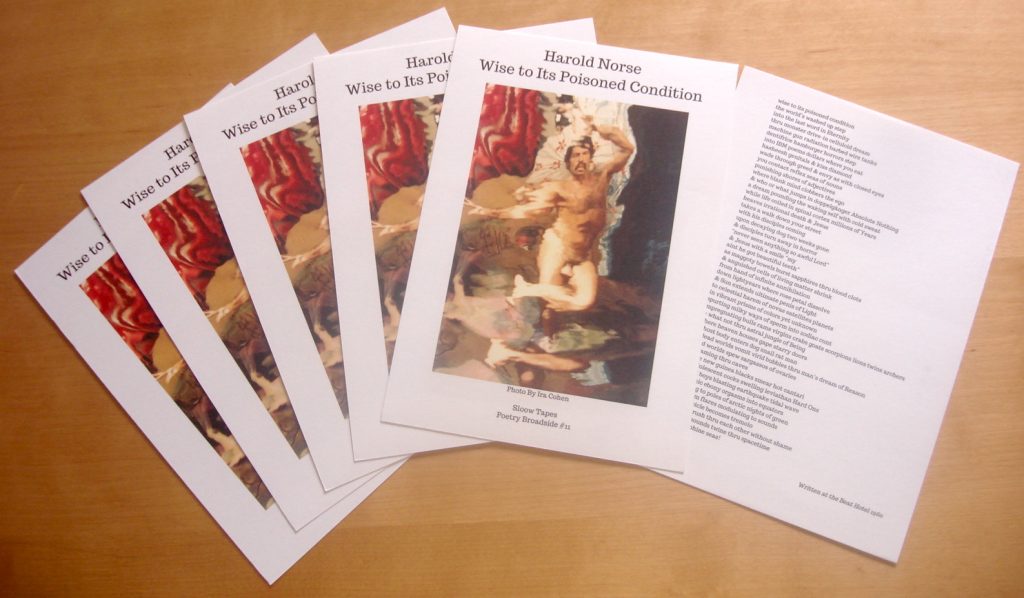 I just received some copies of the broadside and it is a truly beautiful artifact. The psychedelic photograph was from a series of pictures Ira took of Harold in the early 1970s when he was photographing everyone from Jack Smith to Jimi Hendrix in his mylar chamber.

A black-and-white version of that photograph was used for the cover of Harold’s 1976 anthology of gay poems Carnivorous Saint. It was also featured on the back cover of Harold Norse Of Course…, the double vinyl record release of Harold’s 1984 poetry reading in Amsterdam available from Unrequited Records. This collector’s item is sure to be snapped up in no time, so make sure you procure a copy at this link.