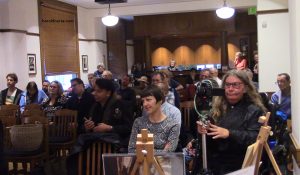 The evening was hosted by Laura Sheppard, events director for the Mechanics’ Institute, in the storied San Francisco institution’s performance café. With wine available from the bar, this elegant room with professional light and sound equipment was a beautiful setting to recall and evaluate the life and work of the Bastard Angel from Brooklyn. 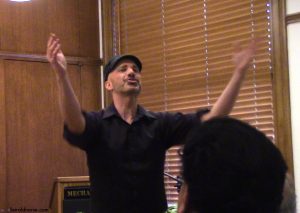 The festivities began with an invocation of queer poetic spirit by the multi-talented Jason Jenn who performed a selection of poems written by Harold that included “A Man’s Life”, Norse’s translation of a sonnet by the 19th Century Roman poet G.G. Belli.

Here’s a clip of Jason’s performance of “At the Caffé Trieste“, written in the early 1970s at the landmark North Beach coffee house as Harold looks back through the ages to the ways in which the poets’ voice guide us. It ends with the line, “this is the only Golden Age there’ll ever be.” 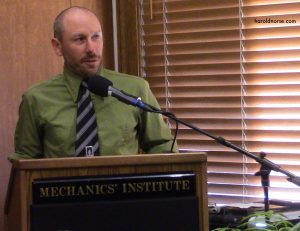 The evening’s compère was Tate Swindell of Unrequited Records who introduced each of the speakers, adding observations into Harold’s life experience. The first speaker was San Francisco based writer Kevin Killian whose friendship with Norse began in the early 1980s.

He spoke with warmth and affection about his friendship with Harold which began when Kevin would wheel his electric typewriter, down Guerrero Street from 24th, over to Harold’s cottage on Albion Street. A speedy typist, Kevin would assist Harold who was compiling material that eventually became his Memoirs of a Bastard Angel. Some of the pieces first appeared in Kevin’s magazine No Apologies which he published with Brian Monte.

Turns out Kevin had been a member of the Mechanics’ Institute at the time he met Harold and had brought him to visit their beautiful library. Earlier Harold had been kvetching to Kevin that none of his books were available at the local branch of the SF Public Library. “It’s only because they’ve been stolen the Public Library,” was Kevin’s clever reply. Here’s a six minute clip of his introductory remarks.

Kevin also remarked on Harold’s youthful spirit when in company with other writers and artists. He spoke of how Harold was always keen on visiting with artists whom he had known from his earlier days, from Tennessee Williams to John Cage, who were passing through San Francisco to participate in one event or another. 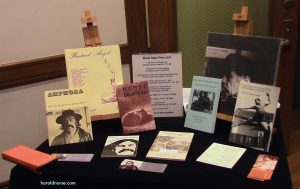 Regina Marler offered insights into the connections between Beat writers and their Mothers which made her anthology Queer Beats a much needed addition to Beat literature scholarship. Her reading of “I’m Not a Man” added another level of appreciation to what is one of Harold’s most well known and well loved poems.

My remarks followed Regina’s sensitive evaluation of how Harold differentiated from his Beat contemporaries in terms of his treatment of women. I quoted from a 1985 letter from Harold to a publisher concerning an updated version of his 1976 collection of gay themed poetry Carnivorous Saint. Here’s an excerpt from the letter concerning Harold’s desire to remove instances of the word “bitch” when the collection was reprinted in 1986 as The Love Poems.

“Such usages do not accurately represent my consciousness now or, indeed, then, if truth be told, as I have always resented slurs of any kind in the language, yet given a macho background have been insensitive to slurs against women, whom I’ve personally always considered the superior sex, in any case…These words are offensive to me and to those I might hurt unintentionally.” 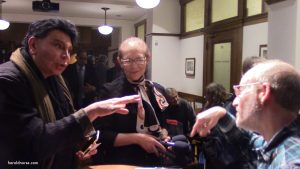 Thanks to Michael Petrelis for snapping the photographs included in this post. The photo to left shows me in an animated conversation with Laura Sheppard and, at the edge of the frame, Count Federico Wardal who attends all the Harold Norse related events in San Francisco.

Harold would certainly have been thrilled that such an event for his hundredth birthday would be hosted at a landmark San Francisco location. Thanks to all those who attended the presentation. Stay tuned for the next report back from the following Saturday’s event at The Beat Museum.

The complete video of the event can be viewed below: