International publishers have recently shown a renewed interest in Harold Norse, as detailed in a recent post about a German translation of Karma Circuit. That momentum continues thanks to two recent publications in Scotland and, once more, Germany.

Author and publisher Eddie Woods first met Norse when establishing himself in Amsterdam in the late 1970s. Both native New Yorkers, the writers cemented their friendship during an extended stay in Barcelona.

It’s precisely this time that’s covered in Woods’ prose piece “Remembering Harold Norse” as part of Smugglers Train. A collection of 19 poems in the original English plus German translations of six prose pieces (fiction and non-fiction), beautifully illustrated, it has recently been published by Moloko+ in Germany. 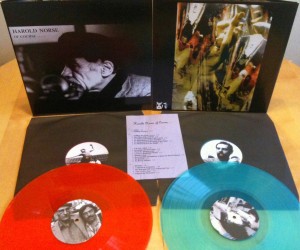 Harold Norse of Course… was recorded during Norse’s 1984 appearance at the seventh annual One World Poetry Festival.

It has lovingly been made available in digital download and deluxe colored vinyl formats thanks to San Francisco’s Unrequited Records. The CD version has since sold out, becoming one of the more recent Norse collector’s items.

“Remembering Harold Norse” tells the story of the evening when this recording was made, revealing the lingering contention of Harold’s connection with writer and painter Brion Gysin, both of whom resided at the Beat Hotel participating in the development of the Cut Up movement. The full text of the prose piece can be read in English on Woods’ website at this link.

Four years ago, Woods published an account of his time as a journalist in Bangkok during the end of the hippy era where he befriended playwright Tennessee Williams, whom Harold Norse first met in the early 1940s.

Tennessee Williams in Bangkok is less a tell-all memoir of Williams (there’s enough of those already) and more an evocative portrayal of Woods’ relationship with a drag-queen prostitute named Kim. Those who may be disappointed that Woods doesn’t dish the dirt about Tennessee will miss out on a sensitive and engrossing tale of Woods’ exploration of sexuality in a foreign land.

To learn more about Eddie Woods’ colorful life, I recommend a somewhat recent interview that can be found at Urban Graffiti.

Eddie Woods is also part of a recently published anthology from Scottish based author and publisher John Reilly, whose earlier 2003 anthology Shamanic Warriors Now Poets was co-edited with multitalented artist Ira Cohen. Described as “a celebration of now unfolding in all its nakedness, manifested and expressed by a gathering of like souls unfurling the banners of beauty and truth, the poetry of now”, it featured work in a variety of media by four generations of counter culture artists.

It certainly lives up to that billing with contributions from, among others, Gerard Malanga, Charles Plymell, Neeli Cherkovski and Lawrence Ferlinghetti. I’m pleased to mention an essay I wrote about the history of the medical cannabis movement has been included in The Final Crusade.

“Medical Marijuana Meltdown” takes a historical look at the medical cannabis movement which came out of alternative treatment AIDS activism and its development of patients’ buyers clubs, arguing for the federal rescheduling of cannabis to acknowledge its known and documented therapeutic benefits. A brief analysis of one part of this historic movement can be read at my other blog ACT UP Archives.

Harold is represented with two very strong political poems “Rapist, Racists & Rats” and “Requiem for St. Robbie Kirkland”. Both poems illustrate his ability to combine both an outrage over violent injustice and a sweeping historical knowledge illustrated with personal details.

The later poem concerns the tragic suicide of a gay youth, composed years before the pressing issue of anti-gay bullying gained recognition by the media. The poem’s emotional punch derives from Harold’s visceral connection to his own bruised youth, some seventy years before Robbie, where he lived in terror of anti-gay violence condoned by parents and teachers.

This was also at the heart of Harold’s final, uncompleted, masterwork HOMO, which examined two millennia of religious and political homophobia through poetry, prose and cut up. An excerpt from the work, published as part of his selected poems, can be read at this link.

stoned with rocks since first grade

at age six, he did not choose

to be gay. He knew nothing

of sex, except as kids do,

Though girlish in childhood

his family loved him no less.

Boys taunted him, hooted and spat

in his face, yelling sissy and fairy

and sister Mary! They laughed at him,

jeering and sneering all day.

As they got older they goosed him

while rubbing their crotches, muttering

and ended the torment

before he returned to ninth grade.

The suicide note said, “I hope I can find

the peace in death that I could not find

in life.” Was this what Christ taught?

He who was mocked and nailed

to the cross? Now in His name

false “Christians” dish out the same.

To learn more about Robbie’s story, I recommend a tribute website created by his family at robbiekirkland.com.