Writing, editing, archiving, and the technology that facilitates such work, too often ends up being a solitary experience. Of the many great happenings which have occurred from publishing a selected edition of Harold Norse’s poetry has been the opportunity to share his work with a live audience. The poetic tradition connects to our ancient roots of oral communication and Harold’s work certainly benefits from being shared in spoken form. 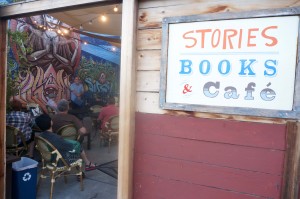 So it was with much excitement that my brother Tate and I journeyed to Echo Park where, for the last five years, Hank Henderson has curated homo-centric (a monthly reading series for the LGBTQ community) on the third Thursday of each month at Stories Books & Café in the Los Angeles neighborhood of Echo Park.

Traditionally homo-centric features writers who have recently published work or seek an outlet to share work in progress. Hank’s interest in and appreciation of Harold’s poetry allowed for a posthumous poet to be featured. Stories Books is a lovely store filled with a wonderful collection of books and the added bonus of a café. One could easily spend the better part of a day there drinking tea and browsing through the shelves. 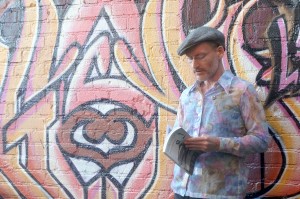 Following my introductory remarks that included a brief biography of Harold and how I came to know him and publish his selected poems, I eagerly grabbed a chair up front for the all-too-rare occasion of listening to other talented, handsome gay men bring their own voice to Harold’s work. As one of the scheduled readers was unable to make it, Hank did an admirable job of jumping in at the last moment. 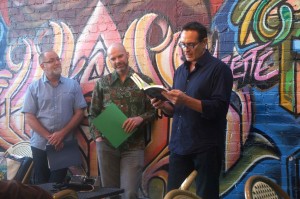 Standing together in front of a brightly colored mural, the three men each took turns reading a poem of Harold’s bouncing from one reader to the next. Jason Jenn is an artist who works in many disciplines from performance to writing to photography. Recently he wrote and performed in a piece about the great gay poet C.P. Cavafy as well as presenting an evening of poetry by Harold’s friend poet and filmmaker James Broughton.

Among the poems of Harold that Jason chose to  perfrom was “Parable” which was published in the September 1953 issue of Poetry magazine. The poem, which still bears the influence of Modernism before Harold turned towards William Carlos Williams’ American idiom, was well suited for Jason’s unique voice. 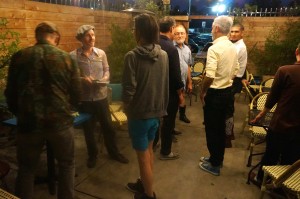 The evening however did not end with the last poem read as one of the purposes of homo-centric is to bring community together to share and connect. I had a terrific time hanging out afterwards answering questions, hearing what other creative queers are up to and even signing a couple copies of the selected poems.

All this would not have been possible without the enthusiasm and dedication of Hank Henderson. Having put on a number of readings myself, I am inspired and appreciative of Hank’s hard work. If you’re happen to be in Los Angeles on a third Thursday, make sure to come out for homo-centric. If you’re a queer writer traveling through town, look into the possibility of participating in homo-centric.