A new anthology features an essay on the visual artwork created in the early 1960s when expatriate writers were living in Paris at the Beat Hotel. The Outlaw Bible of American Art is the final edition in a multi-volume series overseen by author Alan Kaufman, a good friend and admirer of Harold Norse. The series’ first volume which focused on poetry gave the Beat poet prominent exposure.

The latest anthology centers on visual art which has largely been ignored by the establishment. It’s a massive volume that rewards readers with introductions to artists and movements, from the post-WW II to the early 21st century, whose work challenged the complacency and commercialization of the art world. The book opens with Boris Lurie, the No!Art Movement and other New York based artists before moving to the visual art of Beat writers.

The photographs of Allen Ginsberg were exhibited several years ago at the National Gallery of Art and the paintings of Lawrence Ferlinghetti are familiar to anyone whose visited City Lights Bookstore. Kaufman’s anthology calls special attention to the work done at the Beat Hotel.

While the paintings of Brion Gysin have been exhibited in many venues and William Burroughs’ visual works were the subject of a 1996 exhibit, the Cosmograph paintings made by Harold Norse are relatively unknown, though several were featured in the Whitney Museum’s 1995 exhibit Beat Culture and the New America 1950–1965.

An essay co-authored by myself and my brother Tate, of Unrequited Records, offers a succinct overview of different artists who lived at the inexpensive, dingy hotel on Paris’ Left Bank where the Cut Up approach to literature was developed. Following an accidental cutting of paper by Gysin, Burroughs and Norse joined in the experiment of cutting up text to create new forms of communication beyond the rational. The essay begins…

“The Beat Hotel has been rightfully enshrined as one of the preeminent sources of avant garde art of the Post-war era. The cut-up method developed at the Hotel acted as a precursor for the radical changes in the way we receive and understand media, from the fast editing of MTV videos of the 1980s to today’s world of texting and social media. Yet little attention has been paid to the visual art created during this fertile time.”

Under the influence of hashish, Norse threw pigment onto coarse paper which was then rinsed in a bidet. These proto-psychedelic works of startling color revealed undiscovered psychic terrains and were singled out by Burroughs who wrote an introduction to an exhibit of the paintings at the Librairie Anglaise that was featured in Life magazine. From Burroughs introduction…

The essay concludes with the following paragraph:

“While the influence of literary cut-ups continued to be seen in popular culture, from David Bowie’s use of cut-ups on his 1974 album Diamond Dogs to Thom Yorke selecting lyrics at random for Radiohead’s album Kid A in 2000, the visual art produced at the Beat Hotel remains unjustly neglected. Hopefully future scholars will find interest in these dusty gems from a forgotten time of vibrant North American expatriate activity.”

Reading The Outlaw Bible of American Art was like looking through a creative genealogy where I was reacquainted with artists who had influenced me while introducing artists previously unknown to me, but with whom I felt recognition. It also exposes readers to regional movements such as the Cleveland based artists like D.A. Levy and T.L. Kryss. 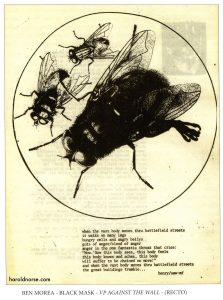 One artist I was surprised to not know of is Ben Morea, considering his early alliance with Allen Ginsberg, the Living Theater and the radical arts movement of New York City’s Lower East Side. Harold Norse was involved with the creation of the Living Theater and remained close with its founders Julian Beck and Judith Malina.

With the Becks, Morea joined in serving free food to the poor with Dorothy Day and the radical activists at the Catholic Worker, along with their protests against nuclear warfare. These experiences are documented in Judith Malina’s diaries published in 1984 by Grove Press. 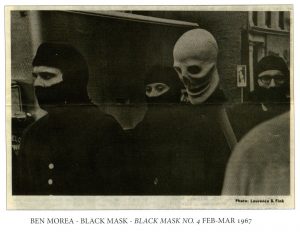 By the mid-1960s, Morea along with Ron Hahne began producing the broadsheet/zine Black Mass whose title was inspired by the rising movement of black intellectuals and radicals. It’s provocative text and cut-and-paste aesthetic echoed the work of The Situationists and looked forward to zine-based movements such as Homocore and Riot Grrl.

The publication’s outreach led to establishing the anti-consumerist Free Stores, where people were able to obtain basic goods without currency, which later morphed into the underground anarchist affinity group Up Against the Wall Motherfuckers. 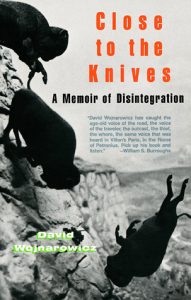 Among the anthology’s most extensive essays are those about writer, artist and filmmaker David Wojnarowicz. Best known for his searing narrative memoir Close to the Knives: A Memoir of Disintegration, Wonjarowicz’s writing takes off where Herbert Huncke and William Burroughs left off.

His sexually provocative writing differed from that of L.A. novelist John Rechy in that Wonjarowicz did not shy away from the political reality of gay oppression. Later he became an active member of the AIDS Coalition to Unleash Power- ACT UP NY.

Wojnarowicz’s visual work defies easy classification. The work varies in format from sculpture, paintings, to stencils, collage and installation. He collaborated with other artists including a series of photographs taken in 1980s New York City with Wojnarowicz wearing a mask of French poet Arthur Rimbaud. He also collaborated with filmmaker Tommy Turner on the unfinished Super 8mm film Where Evil Dwells.

Among the imagery associated with Wojnarowicz’s visual art are children and houses sprouting flames, canvases and bodies covered in maps with their pastel colored countries contrasting with the blue of the oceans, metallic machinery, bugs and serpents, as well as Christian iconography. 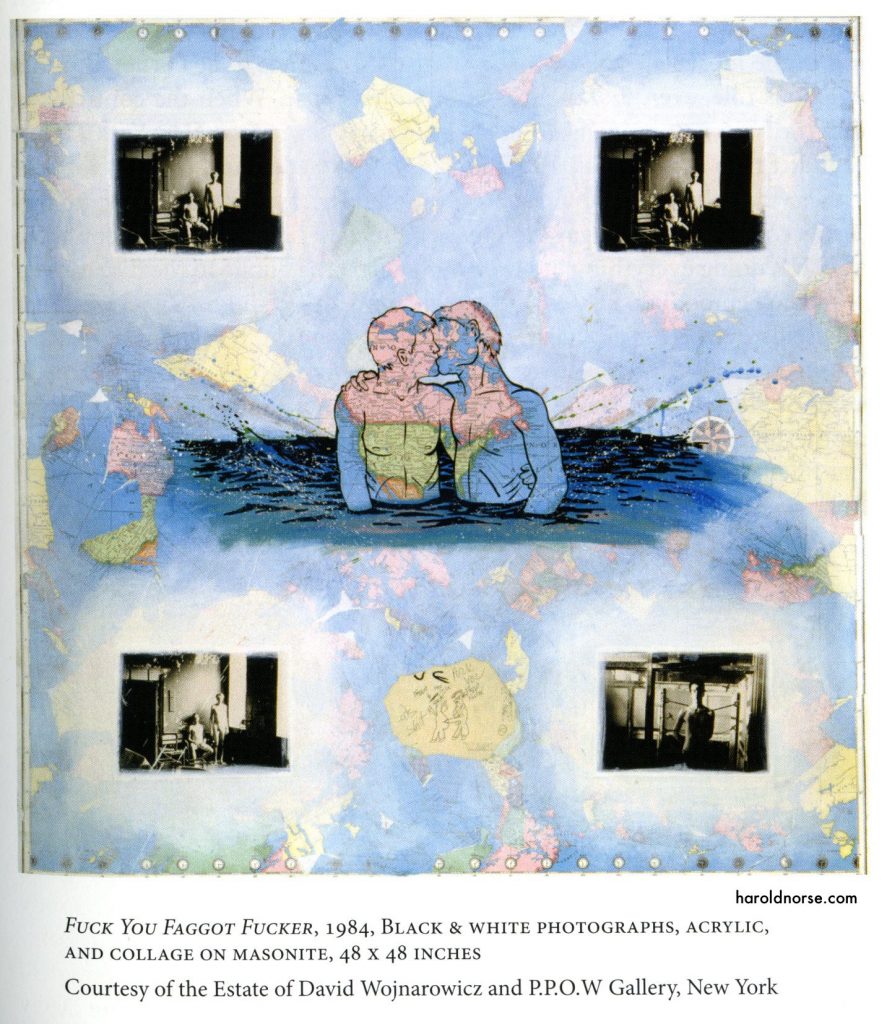 His use of sexually explicit (though unapologetic may be a more apt description) homoerotic imagery brought controversy when the hateful and hate-filled conservative group Focus on the Family targeted Wojnarowicz’s participation in an exhibit which received government funding. Though this brought his work into the larger focus of the culture wars of the Reagan and Bush years, his response differed from apolitical gay photographer Robert Mapplethorpe in that Wojnarowicz fought back. He sued Focus on the Family for misappropriating his imagery in the group’s fundraising material and successfully won an injunction.

While there are a number of worthy artists not included in The Outlaw Bible of American Art, such a collection can never encompass all those who deserve further attention. Alan Kaufman is to be commended for publishing his own extensive curation. Here’s hoping there’s more recognition for the many neglected American artists whose vital work remains hidden. This post will end with some additional works included in the anthology: Winston Smith, Steve Dalachinsky and Jeff Kramm.